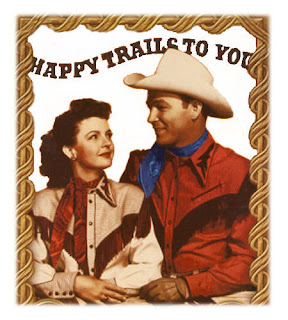 The Final Chapter of the Tule Flats Saga

Preparation for the 30 hour marathon weekend, the grand finale of the first season of the Tule Flats Ghost Town, were well on their way. We didn't add much more than we already had entertainment-wise, and, in retrospect, we should have done a lot more. Live music should have been an option and since it was Halloween, we could have had some sort of haunted attraction. But we had the rides, such as they were, movies in the hotel and of course, we had the gunfights scheduled to going we into the night. The thought of an after-midnight show really appealed to those of us who would have been partying heartily ourselves. 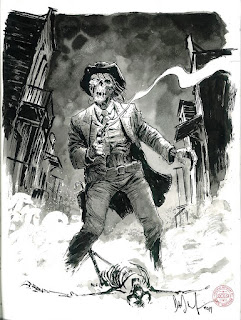 For the last street shows of the year, I came up with a couple of newbies, the first written specifically for Grant-Lee Phillips as the Russian gunfighter character Two Gun Boris. ("I am Two Gun Boris"  "You on have one gun."  "Ha! Joke is on Boris!") It was a perfect showcase for Grant and I knew he would run with it. (I used this same character in my melodrama Song of the Lone Prairie, now Song of the Canyon Kid) The other was called The Return of the Gunfighter, a Halloween themed piece that had a pair of bullies picking on some town folk including a little kid whose father was a gunfighter who had been shot down a year before. When the kid cried, "You wouldn't do this if my pa was here!", that dead pa in question rises from the grave and shoots the two bullies down. He kisses his daughter goodbye and exits into the night. Now we needed a spectacular special effect for his entrance and subsequent exit, so Bill Humphreys came up with an idea that involved a line of gunpowder on a pair of 2x4s on either end of Main Street. When ignited, the first looked like a curtain and the zombie gunfighter (Jim Cusick dressed all in black as always) stepped through the smoke. When he left, the pyro went off after him, closing the curtain behind him. Awesome. Perfect for an evening performance. The main problem was that there wasn't a completed script because, given the time constraints, I ran out of time and felt the show could be an improv since one of our regular shows, The Boss, started that very same way. After a couple of rehearsals, I was confident enough that it would work. 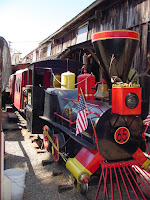 Another factor in this marathon weekend was the acquisition of a temporary license to sell beer in the town. It seemed like good idea at the time and certainly those of us that enjoyed a brew or several had no qualms about it. But when you're dealing with the general public, hoo boy. Watch this space.

That Saturday, the gates opened and we were well on our way. Attendance was way up and things went smoothly right up until about sundown. The debut of The Return of the Gunfighter went off with a lot of hitches. I was dealing with a pair of non actors in the roles of the bullies, one of which had a snoot on from dipping into the beer supply, a right he believed he had since he was one of the town's partners. As a result, the both of them had no clue what to do, jumped in far too early and basically made it a confusing mess, a major error on my part. The only things that saved it at all were those bloody special effects which got a rousing cheer from the large crowd but wasn't enough to appease my anger, mostly at myself for not being better prepared.

As the night wore on, the brewski on tap was taking its toll on the patrons as they swiftly grew a little too rowdy and overbearing for us to wrangle.  When we staged our 10pm gunfight, the streets were packed with suds swillers left, right, over and above. We had to yell our lines at the top of our lungs to be heard, not by the audience but each other. Once that debacle was blissfully over, the decision was made to break up these boozehounds and even close to town at midnight, ending the 30 hour marathon concept. Most fols left peacefully, but the saloon was packed with inebriated owl hoots and had to be cleared.  This meant all hands on deck, so every cowboy available was ready to rustle this herd out the front gate, easier said than done. Ed Thorpe, now wearing Sheriff John's badge, thought it best to get everyone's attention by firing his pistol inside the building. Well, it sure brought everything to a halt alright until someone made an announcement along the lines of "You don't have to go home, but you can't stay here. It's closing time!" But once Ed holstered his weapon, a drunken yahoo behind him confiscated it. Cocking it, he waved the six-gun at everyone grinning like the goon that he was and backed out of the saloon onto Main Street, many of the cowboys stalking him, particularly Ed who seemed like he was ready to pistol whip this hombre once he retrieved his weapon. I had slid out behind this dipsy desperado, realizing like everyone else that this was spinning out of control fast. I have no idea what got into me but once he stepped out of the saloon and onto the street, I jumped onto his back pinning his arms to his side. He flung me back and forth, trying to throw me off but I held fast. Yee=ha! Ride 'em cowboy! This gave the other gunfighters enough time to finally snatch the gun away once and for all and said varmint was escorted off the premises along with the rest of his boozy compadres. The gates were locked for the night we went into lockdown until the regular opening time of High Noon for Day 2. 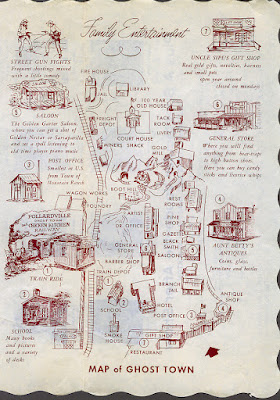 A good steady flow of (blissfully sober) customers entered through the front gates of Tule Flats that last day of 1979. All went swimmingly after the near-boondoggle of the night before. The street shows in particular were going beautifully, especially the one (and only, for some reason) performance of Two Gun Boris. The success of that gunfight more than made up for the mess of the other new show the night before. That one may have had some spectacular fireworks to make up for its lack of anything else, but Two Gun Boris had Grant-Lee Phillips in the title role, the best special effect of all. 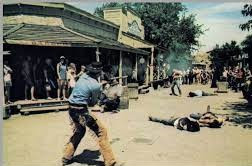 The last gunfight of the day and season was to be Saddle Drop, a gunfight that had been performed since day one of the original Ghost Town. I thought it was time to give this show a decent burial, a chestnut that had pretty much worn out its welcome as far as I was concerned, no matter what we added to it over time. For example, we added a bit when the sheriff gives his adversary a fighting chance by allowing him three free shots, knowing full well that he would miss which, of course, he does. The gags were usually a bell ringing for shot number one, a rubber chicken falling into the middle of the street for number two and a cowboy falling off the hotel onto a rigged wagon behind the bad guy for shot number three. But for the final shot that afternoon, bodies fell everywhere, the rest of the cowboys who weren't in the show and a few spare Ghost Town employees as well, one end of the street to the other all the way down to the hotel where, of course, somebody fell off the balcony one last time. Then everyone, the entire cast and then some, gathered together in the middle of the street in a circle, arms around each other and sang the great Roy Rogers classic "Happy Trails" for the audience, for ourselves and for the Ghost Town itself. 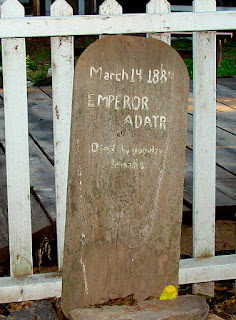 And with that, Tule Flats Ghost Town rode off into the sunset after season numero uno. And while it reopened the next year, several changes had come down the pike. The four partners basically split up and a few key cast members had moved on, so the magic of 1979 had worn off, settling back into the way things used to be once again. Eventually, the town reverted back to the ownership of Neil Pollard, changing the name back to the original Pollardville Ghost Town as it remained until finally closing down altogether in 2007.

The inaugural season of Tule Flats was actually a coda of my Freshman year at Pollardville University. So much of what I learned on the dusty streets of that town gave me the necessary tools to move on to the next chapter of my "academic" life including crowd work, comedic timing, character building, not to mention Writing and Directing 101. If it wasn't for the Ghost Town, I wouldn't have been able to accomplish what I did going forward. I still have my hat, holster and six-gun stashed away to remind me of who I was and always will be, a weekend cowboy through and through.

The first five chapters of the Tule Flats saga, as well as other Pollardville stories from the Ghost Town and Palace Showboat can be found at:

TALES FROM THE VILLE

I SHOT THE SHERIFF