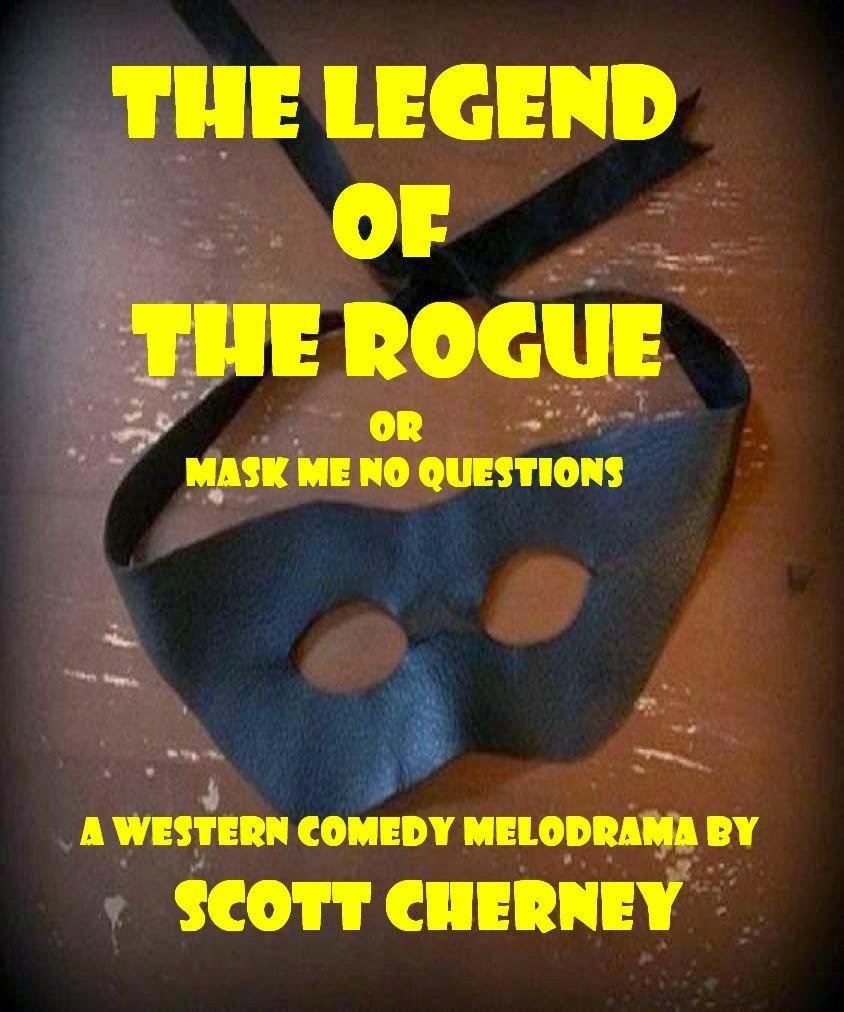 Rising from the ashes...or emerging from a pile of papers...is THE LEGEND OF THE ROGUE, yet another western comedy melodrama in the grand tradition of SONG OF THE LONE PRAIRIE.

Grand tradition, my Aunt Petunia's pooting patootie. Boy, two productions of the same script in one year and all of a sudden, it's OUR TOWN. Never mind that it took 27 years for even a second show to get off the ground...

SHUT  UP, YOU! Ignore that snarky naysayer in my head. How the hell did he find his way into this blog?


THE LEGEND OF THE ROGUE was my first solo effort as a melodrama playwright after Ed Thorpe and I wrote LA RUE'S RETURN for the Palace Showboat Theater stage at Pollardville. This is my homage to the masked western hero sub-genre which includes The Lone Ranger, Zorro and Marvel Comics' Two Gun Kid. Coincidentally enough, I had penned a Lone Ranger sketch for the previous show at the Palace, GOODBYE TV, HELLO BURLESQUE.

The Rogue had been a character I created out in the Pollardville Ghost Town but never got the chance to bring him to life on those mean streets, so I featured the character in another script called THE WRATH OF THE ROGUE or WHO IS THIS GUY ZORRO ANYWAY? It landed with a thud after I unsuccessfully submitted the script to Goldie Pollard, the producer and Mother of Us All at the Ville. The Rogue was more of a Zorro type complete with cape, mask and sword that glowed in the dark. It wasn't much, except for this exchange between the hero Brian Ryan and the heroine Georgia Washington after she discovers his secret identity. These were meant to be asides to audience.

Eat your heart out, David Mamet. 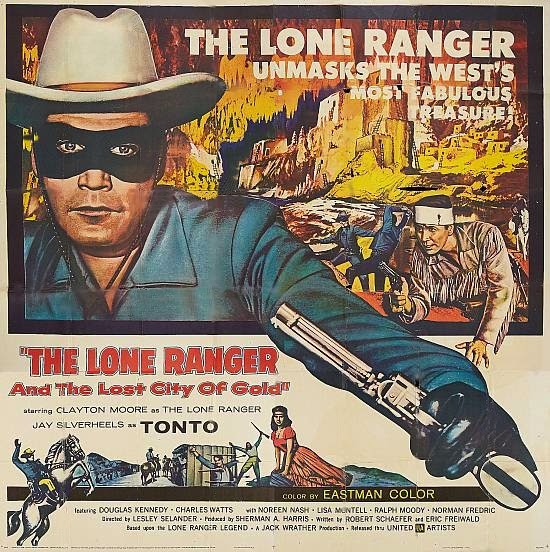 But I gave it another go a few months later, turning the new script into an origin story instead and a plot similar to a movie from my youth: THE LONE RANGER AND THE LOST CITY OF GOLD. However, I needed a major element that THE WRATH sorely lacked: A good villain. What's an evil trait not seen in most melodrama bad guys. Well, I hear racism's pretty bad. How about a good old fashioned bigot? Alright, but what kind? Hey, it's the Old West, what say we have an ex-Confederate officer, a Foghorn Leghorn type, who wants to fight another Civil War and set things right again? And he can oppress the Indians at the same time? But what to call him? A name hit me from the deep recesses of my demented creative soul...Randolph Hitlear. Of course! A Kentucky Fried version of the worst villain of all time!

Once I had my villain, I was off and running. I knocked out a first draft in four days time. Within another week, I handed it off to Goldie and, saints be praised, it green-lit as the next production. I didn't have a sub-title at the time and reluctantly settled for GOOD GUYS WEAR BLACK, also the name of a Chuck Norris film, one that my mom once mispronounced as BLACK GUYS WEAR GOOD, another concept entirely.

(The saga of this particular production where I was chosen as the writer/director of the vaudeville section as well, is a tumultuous tale to be told another time. Let's just say in the most cliched of terms, "Be careful what you wish for.")

However, I will say that THE LEGEND OF THE ROGUE, directed by Bill Humphreys, had its one and only run at the Palace Showboat for the first six months of 1981. I never got a chance to see it because I was in the cast. It has not seen the light of day since. 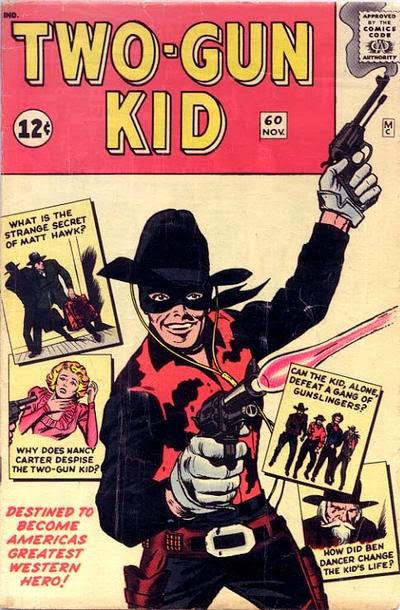 The personal triumph of SONG OF THE LONE PRAIRIE this past summer has given me the initiative to revisit this story that I had felt was beyond help. But a fresh perspective works wonders and I realized that I hadn't given the material enough credit. There was enough here for salvation and development, so I went ahead and expanded the story and characters to make more it more of a well-rounded story instead of an elongated sketch. Hence, THE LEGEND OF THE ROGUE lives again and this time with a different sub-title: MASK ME NO QUESTIONS. I'm still only half-sold on this, but I have a feeling Chuck Norris might come after me for copyright infringement. Sure, he might pull a ham-string kicking me in the face at his age, but then again, I didn't need my face rearranged into a Picasso either.

Here's the story and yes, it's full of very obvious spoilers:

Hard times have fallen on the Clayfoot Indian tribe with the arrival of Randolph Hitlear, an ex-Confederate general obsessed with idea of starting a second Civil War under his leadership. To finance this effort, Hitlear searches for the Clayfoot's mountain treasure, the Tomb of Gold. With the help of his dastardly henchmen, Ashley and Rhett, Hitlear forces the tribe into slavery to dig for the gold including the Clayfoot leader, Chief Boyardee. His daughter, Fawn, is a mystic who has the ability to speak to the Great Spirits. From them she learns of a prophecy that states that "the dark cloud of eveil shall ride a warrior of good who shall become a savior". With that thought in mind, Fawn seeks the help of Brian Ryan in nearby Parched Throat, Arizona, a handsome young lawyer who moonlights as sheriff of this one lizard town. Brian falls in love with Fawn at first glance, raising the ire of saloon singer Sugar De Spice who wants to put her claws into the novice lawman herself. When the sheriff agrees to help, a jealous Sugar, along with the weasely corrupt Indian agent Percival P. Pestt, inform Hitlear. Laying in wait for the sheriff, Hitlear gets the upper hand upon Brian's arrival and in the fracas, Fawn is killed. When Brian is left for dead himself in the desert, Sugar has a change of heart and rescues him. Back in town, Fawn's spirit comes to him in his delirium and empowers Brian with special abilities given to him by the Great Spirits since he is indeed the warrior of good in the prophecy. Brian dons a mask and adopts the persona of the masked avenger known as The Rogue. He catches up to Hitlear just as he enters the fabled Tomb of Gold and thwarts his plans once and for all, saving the Clayfoot tribe and the nation from this vicious war criminal. And the rest is legendary...

Now THE LEGEND OF THE ROGUE has been published for the first time in paperback and PDF download, both available right this very second at my store on Lulu.com.

MY STORE ON LULU.COM

Will it ever see the light of a stage again? Maybe. Perhaps I should ask the Great Spirits. Of course performance rights are available. Drop me a line at writtenbysc@gmail.com fo' mo' info, you mo fos.

Posted by Scott Cherney at 2:20 PM