The Footlight Theatre Co. production of SONG OF THE LONE PRAIRIE opens August 29 in Jamestown, 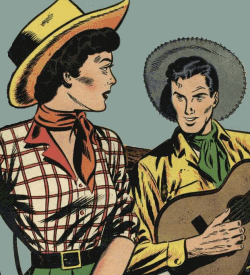 CA, not far from whence it first reared its white Stetson way back in 1987 at the Palace Showboat Dinner Theater at Pollardville. This is as close to home as the show's been for 27 years.

And after all, that's the real theme of this show: Going home. I had put melodramas in my rear-view mirror a long time ago and yet, I returned to my favorite, LONE PRAIRIE, and wrote a novelization of it as a lark. It turned out to be the project that rekindled my love for writing, comedy and yep, melodrama. An e-mail out of the blue from the Great American Melodrama and Vaudeville in Oceano got my show produced for the first time in the 21st century. So I sent out to few other companies and lo and behold, here's the Footlight Theatre Co. ready for the second production of this script this summer.

Now I've got a total of three scripts ready for the big time, LONE PRAIRIE, LA RUE'S RETURN, my first co-written with Edward Thorpe and a punched up version of my first solo show, THE LEGEND OF THE ROGUE or MASK ME NO QUESTIONS. (New sub-title. It used to be GOOD GUYS WEAR BLACK, but I don't want my ass kicked by Chuck Norris. I don't care how old he is. He can still rip my lower intestines out with his bare hands and make me play jump rope with them)

Whatever goes around, comes around and I'm enjoying the ride. 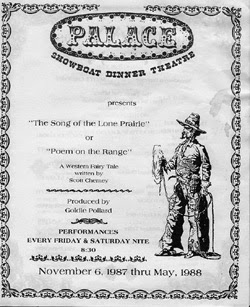 This is the front of the Palace Showboat program.
Obviously, I didn't design this. The title isn't very prominently displayed. Neither is my name.  Goldie's name is. Hmm...
It also calls the play "A Western Fairy Tale". That's about as accurate as calling SAW a slapstick romp that's fun for the whole family.
And what in the name of Sam Peckinpah is up with that cowboy? Who is he supposed to be? Give him a golden earring and a head scarf underneath that hat and it could be Two Gun Boris...or Charlene Atlas before a good scubbin' and waxin'
I'm not sure what that stain on the program is. It could be from Pollardville fried chicken.
Yeah I can say all this now, but I treasure this like a Picasso.
But that was then... 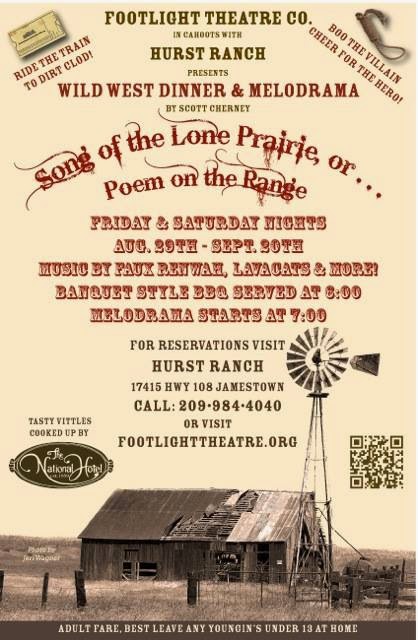 And this is now.
This is the latest incarnation of this show, quite different than the first in many ways. Read this from the Footlight Theatre Co. press release.

Hurst Ranch and Footlight Theatre Company have teamed up to meritoriously bring to life the world of Wild West Melodrama!  Set at the striking Hurst Ranch  with its beautiful vintage grounds, audiences are sure to have an outrageous, side-splitting laughter filled evening full of all sorts of knee-slappin, toe-tappin old timey fun!


Every performance begins with a train ride into the "town" of Dirt Clod on the Hurst Ranch Railroad, where guests can arrive in town and belly up to the bar at The Dirt Clod Saloon.


At 6:00 pm, with the ringing of the dinner bell, a 3 course gourmet Western BBQ is served up by The Historic National Hotel of Jamestown.


Romp-stomping action and non-stop hilarity ensue after dinner around 7:00 pm, just as the sun begins to set over the beautiful "Dirt Clod Lagoon"!!  In classic melodrama fashion audiences will get to boo and hiss the villains, sigh and swoon for the sweet heroine and cheer the brave hero!!

And the next generation of actors portraying those wackadoodles I wrote many moons ago include:

Rounding out the cast (those MOP-Mit Out Photos) are Art Delgado as Basil Kadaver, Anthony De Page as Dalton Doolin and Don Pierazzi as Mayor Darling.

So that's the story, glory.
Song of the Lone Prairie or Poem on the Range
Aug. 29-Sept, 20 in Jamestown, CA
And it was written by...
Hang on a second. Let me look at the poster again.
"By Scott Cherney."
WHY IS MY NAME STILL SO SMALL?
Sigh...
Everything old is new again.
Posted by Scott Cherney at 1:50 PM