The Return of La Rue's Return


Evil always returns...
only this time, it has a bad French accent!

Oh, he's back alright. Jacques La Rue, that is. He's the villain in the very first theatrical venture show written by Edward Thorpe and myself. a little melodrama called LA RUE'S RETURN or HOW'S A BAYOU?.


It's amazing how LA RUE continues to rear his bereted noggin after all these years. The show was born in the brain of my best friend Ed Thorpe back in 1970s. He had spent a good deal of his teenage years in the magical land fabled in story and song known as Pollardville, eventually becoming a cast member in the melodrama/vaudeville production at the Palace Theater long before it became the Showboat. Ed had been inspired to pen his own melodrama a few years later with the goal of presenting it on that very same stage. When he showed what he had to me, I could see that all the elements had been put into the place, but it had only one problem It was too short. The script in that stage was perhaps fifteen minutes long at best. He graciously asked me to collaborate with him to flesh it out and yup, make it longer.

Soon these two neophyte playwrights were off and running. Oh, we stumbled along the way, both of us filled to the brim with the arrogance of youth and the stubbornness that accompanied it. We argued over everything, whether it be a scene or merely a syllable. One particular argument concerned a character description with a stupid pun I came up with that doesn't even bear repeating. Okay, fine...

Lt. Wexstad was so dumb that instead of leading his men into battle, he lead them into cattle.

But it wasn't long before we struck gold and when we did, we'd celebrate like twin Walter Hustons in TREASURE OF THE SIERRA MADRE. Our joint effort was productive, tumultuous and ultimately, forever cemented a bond between two best friends that had already known each other for at least ten years up to that point.

Ed and I also had the same comic sensibilities. In other words, we laughed at the same stuff. I can honestly say we were both students of comedy as well, well versed in both current and classic. By that, you can also assume that we borrowed from everywhere to put this script together, sometimes out and out lifting favorite bits or lines from other sources.  The formula for our first script was: Larceny + Inspiration=Creativity. As a result, we wrote some quite genius pieces of our own and came up with this big bowl o' gumbo known as LA RUE'S RETURN.

For those not in the know, LA RUE'S RETURN tells the tale of French criminal Jacques La Rue who returns to New Orleans to exact his revenge on those who sent him to prison...including his ex-fiancee Polly Montclair, owner of the French Quarter bistro Chez What. Standing in his way are a brave, yet dim US. Cavalry officer and a whacked-out witch. The action culminates in a swashbuckling sword fight in the swamp and the overwhelming power of love. Gee. That sounds so damn good, I might want to see that again myself.

Son of a gun if that show didn't see the light of day as the Pollardville Palace Theater's 30TH production.  LA RUE'S RETURN or HOW'S A BAYOU? was directed by the one and only Ray Rustigian (with some great pieces of business from producer Neil Pollard) where it ran for six months. About ten years later, I was fortunate enough to direct my own version of LA RUE at that same magical theater with an updated script.

I had tried to get it published several times over the years without any success, so I started to solicit theaters on my own, sending the script out and crossing my fingers waiting for an answer. Sometimes they sent the script back. Sometimes not.

The Black Bart Players in Murphys, California took the bait in the mid Nineties and produced our first non-Pollardville LA RUE. Ed and I attended a performance and were invited onstage to take a bow, a true victory lap.

One theater that also took the bait, but cut the line as well was the Gaslight Theater in Campbell, California near San Jose. Coincidentally, I had been alerted by Steven Orr, the actor who originated the role of La Rue at Pollardville, offering his congratulations that they were running our show. The problem was that we didn't know anything about it, therefore running LA RUE without our consent or compensation. Ed took after them like a pit bull on steroids, threatening legal action should they continue and to cough up some damages. Their claim was that the LA RUE script that I sent to them years back was sitting in a box and their property. What happened really happened was some unscrupulous miscreant had conveniently torn off the title page with the authors' names and contact information, then scribbled at the top of the following page THE RETURN OF LA RUE. Nice. We ended up settling for a pretty penny, far above what we would have received if they had gone about this right way and allowed them to finish. An apology card listing us a writers "inadvertently" left off the advertising was inserted into each program following this debacle until the end of the run. Needless to say, we didn't attend that production, even though that would have been oh-so-sweet. The Gaslight went out of business soon after, not because of us, but...well, maybe... 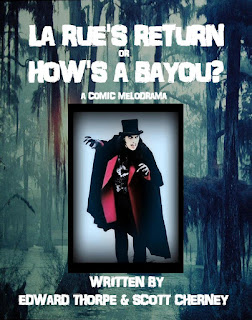 The Golden Chain in Oakhurst, California near Yosemite National Park became the first show of the new millennium and that brings us to the present. After scoring a two-fer with SONG OF THE CANYON KID last year with the Great American and the Footlight Theatre Co in Jamestown, I began to send LA RUE out again as well, but only after attempting to have it published one mo' time, again a dud. But my own efforts to keep this show alive managed to score a two-fer all its own with simultaneous productions in Oceano, CA and West Plains, MO. LA RUE became the first play of mine (and Ed's) to be performed as a Reader's Theaer production.

Now here we are again.

As it has been said before, it behooves me to say it again:

LA RUE'S RETURN is available in paperback and e-book. Performance rights are available....naturally.

Go to my website for more information
WRITTEN BY SCOTT CHERNEY

or email me at writtenbysc@gmail.com

Posted by Scott Cherney at 3:22 PM