Beam Me Up, Scotty

The following revolves around the creation of an interactive murder mystery that has since been re-named MURDER: THE FINAL FRONTIER.

So begins the latest interactive murder mystery comedy written by someone who needs no introduction, but is near and dear to all of your hearts...and if he isn't, he soon will be because...that's the kind of guy he is.

It's me, damn your eyes! Yes, I'm at it again or at least I was a few months ago when I first wrote this here piece o' work that is debuting this month for Mel O'Drama Theatre in the one and only Nashville, TN. (Even though this is my second time in Music City, it's so mind-blowing that something I wrote is playing in that iconic city)

The show in question is indeed STAR TRUCK; THE WRATH OF COMIC-CON. Set at a sci-fi convention called Imaginacon, a tribute to the classic TV show STAR TRUCK is underway with members of the cast including Leon Portnoy, the actor who is forever known as First Officer Mr. Spark, Jean Roddenreel, widow of the show's creator Dean Roddenreel and of course Captain James Tyrannosaurus Kork himself, the inimitable Wilson Chadwick. Also appearing at the convention is the star of STAR BOARS, Carrie Fishwich and someone who may or may not be an alien.

As you can tell unless you're not paying attention, this is all fodder for jabs at STAR TREK, STAR WARS

and basically all things in the geek universe which, in this day and age, pretty much everything. Of course. I include myself in these ranks, having been a geek since the day I first crawled the earth back...well, none of your damn business.. It is also a gold mine of comedic opportunities that I take as full advantage of as I possibly could given the parameters of the murder mystery format. There are digs are the aforementioned STAR shows as well as DOCTOR WHO, THE WALKING DEAD, LORD OF THE RINGS and so on and so forth. Plus I have concocted some of the very best (or worst) puns I have possibly ever concocted. If you think punning is lowest form of wit, well, you're half right. Which half, I don't know. 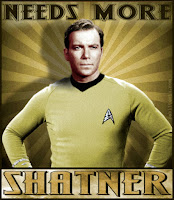 The inspiration for STAR TRUCK derives from the underrated classic GALAXY QUEST (1999), which brilliantly mined some of the same tropes, Mad Magazine's classic parody STAR BLECCH (love that title) and, of course, the SNL "Get A Life!" sketch starring William Shatner. The latter is undoubtedly the Genesis Project for the whole enterprise (wow, two references for the price of one!) Not only does it set up what I wanted to accomplish with this script, but it was also a turning point for Shatner himself. This was when he reinvented himself, understanding that he knew he was the butt of many a joke and now he was in on it too. He could make fun of himself and do it better. Oh yeah, he was Captain Kirk but now he became in full caps WILLIAM SHATNER and he never left. Therefore the victim of my murder mystery just had to be the William Shatner character. It was like MURDER ON THE ORIENT EXPRESS. Who killed Richard Widmark? Everybody! That's the spirit I wanted to convey. Who wants to kill Wislon Chadwick? Everybody! Hopefully, not the audience too. 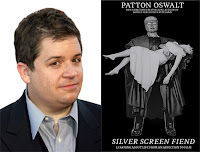 The icing on this cupcake was that when I wrote in Shatner's voice, in his cadence and his goofy sensibilities, I had as much fun as I ever had creating a character. I love this guy and sure hope that it shows. I had some struggles concerning the passing of Leonard Nimoy that I wrote about earlier this year. (See blog post:  HIGHLY ILLOGICAL) Some of the other characters proved a bit more difficult to put together, but fortunately not Dewey Osgood, the host of Imaginacon who turns out to be the hero of the piece. I based Dewey on comedian Patton Oswalt, a kindred spirit and King of All Geeks. Patton's recent book SILVER SCREEN FIEND is a fantastic movie memoir, not unlike my own IN THE DARK but light years beyond in both style and substance. Carrie Fisher who has had a long gestating and ridiculous feud with William Shatner is obviously the model for Carrie Fishwich. Majel Barrett is Gene Roddenberry's widow, but I based her character on the role she played as Deanna Troi's mother on STAR TREK: THE NEXT GENERATION. And I paid homage to Portland home-girl Katee Sackhoff's BATTLESTAR GALLACTICA Starbuck persona for Nirvana Nightengale.

Thanks to producer Melanie Roady of Mel O'Drama Theater for giving me another shot after last year's PERILS OF FRANCOIS. Recently Mel accepted the position of Executive Producer of the theater at Events on 3rd in Nashville. Good on her.  And a big shout-out to director Andy Johnson who played Pierre Perrier in FRANCOIS and another fellow geek, a perfect fit for this show. Finally to a cast that I'll not only never meet but never see perform my work in front of a (hopefully) live audience, I can only say in the grand tradition of theater..break a leg.

For myself, I'll hoist a toast on opening night from across the country. Here's to another original script under my belt. This is also the fourth production of one of my plays this year, one more than 2014. I would have had five, but the theater that had scheduled the show met with some very hard times, a result of the recent flooding in South Carolina. I wish them and everyone back there the very best.

It's been two years since I was first contacted by the Great American Melodrama to have one of my scripts performed which has led to this sudden resurgence as a playwright. It appears that the third act of my life I've been searching for is one that I'm writing myself. Imagine that.

For ticket info about STAR TRUCK: THE WRATH OF COMIC-CON, go to:
MEL O' DRAMA WEBSITE

MURDER: THE FINAL FRONTIER IS NOW AVAILABLE AT OFF THE WALL PLAYS

For infor about my other scripts or even if you just want to send me a mash note (look it up, young 'un),
please e-mail me at: writenbysc@gmail.com

Posted by Scott Cherney at 9:19 PM