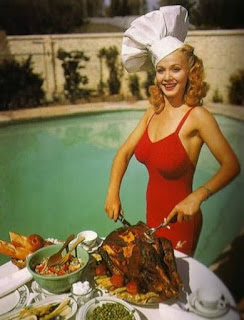 Now comes the time of year where we actually acknowledge those things in our lives for which we are indeed grateful because, Heaven forfend, we should do it a daily basis to counter-balance the seemingly endless avalanche of horrible stuff 'n nonsense we also have to contend with in this, what used to be known as the best of all possible worlds.

(Whew! At this age, even run-on sentences wear me out!)

As always, I am eternally thankful to win the life lottery with the family and friends that I have in this lifetime. I would say that it goes without saying, but they humble me into welcome submission every time. As time passes like a bullet train, I will proclaim love for my family until my dying breath. As for my friends, I still cherish our time together and long for more even as it becomes more impossible logistically.

As for my recent success with my plays, (alas, so much more lucrative than my books) my unprecedented fourth year has wrapped up this past Halloween. SONG OF THE CANYON KID was the grand finale of the summer melodrama program at the Mantorville Theatre Company in Minnesota, a group I had been trying to get my work into long before I began this journey. DEAD TUESDAY, my initial murder mystery featuring the inimitable froggy bon vivant Francois Fibian, got another run, this time in Illinois. And MURDER: THE FINAL FRONTIER received an amazing three separate productions in the aforementioned Illinois as well as with the San Luis Valley Theatre Company in Fort Garland, Colorado and Brickstreet Players in Clovis, New Mexico. That breaks my personal best of five productions in four different states.

It came with a price, though.

I discovered that THE FINAL FRONTIER had been staged without my knowledge or permission at the same time it was being presented in New mexico. I had been following up with some theaters that I had sent my script by checking their websites or Facebook pages when lo and behold, what do I see?       MURDER: THE FINAL FRONTIER went on-and off-the boards the week before, exactly at the same time as the Brickstreet Players production on the other side of the country. It was then and there that I discovered the true meaning of the term "gob-smacked". The weird part was that the guilty party was a company that had produced DEAD TUESDAY earlier that year. The producer had read the script and expressed an interest in an October show, but didn't firm up any dates with me so I moved on to other matters. When I read about the show, all I could think was "Oh, no. Not again."

Submitting scripts to theaters can be dicey. Sometimes they respond, sometimes they don't. One can only hope they will do the honorable thing and not rip off the playwright especially since, gee whiz, it's against the law. I have to be extra vigilant by following up with those I've submitted to and checking their websites just in case something happens.

And, gosh darn it to heck, things do happen. 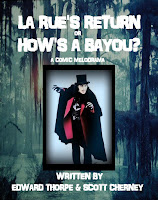 In the year 2000, a friend of mine congratulated me on the production LA RUE'S RETURN at the Gaslight Theater in Campbell, CA. I said, "Thank you. Wait a minute...WHAT????!!!" In the late 1980s, I had submitted this script to the Gaslight and never heard from them, even supplying them with SASE (look it up, kids) to return it upon rejection. They didn't. Instead, they tore off the title page that included the authors' names and scribbled the incorrect name THE RETURN OF LA RUE at the top of the next. Then they tossed into a box with a bunch of other scripts. Someone dug it out years later and said "Hey! Here's a melodrama we can do for free!". And so they did. I contacted my best friend, Ed Thorpe, who originated LA RUE and brought me on as a co-author, and he, understandably, hit the proverbial ceiling. Ed tore after the Gaslight like a rabid wolverine on meth and, thanks to his efforts, got us a nice settlement as well as, since the production was in full swing, an apology to the both of us enclosed in each and every program until its final curtain.

Cut to 2015 when MURDER: THE FINAL FRONTIER, then known as STAR TRUCK: THE WRATH OF COMIC-CON, was about to head into its first production with Mel O'Drama Theater in Nashville when another theater that I had solicited was about to do the very same show at their dinner theater in South Carolina without consent, written, verbal or even a nod of the head from me. But this time I didn't have a lift a finger since the long arm of the law slammed the door on this establishment and shut down the show before it opened. Oh, it wasn't for my benefit. It seems the owner/producer of this operation had sex with a 14 year old, who had been in one of his shows and could very well have been cast in mine. Said offender got caught with his pants down and, unfortunately, has since started another theater, though he could very well go into politics if recent events are any indication.

So I dodged another bullet until this year with the same damn show. When I contacted the producer, I got a string of apologies and a promise to pay what was owed. (My friend Ed thought I should charge them double for my trouble but I balked at that...this time) It was resolved in less than a week to clear up and the matter was settled. I won't mention the name of the group because they are going out of business at the end of this year and there's no reason for me to drag them through the mud. Strangely enough, all three of these violating theaters closed soon after their infractions, or in the case of the producer of the Pedophilia Follies in South Carolina, just before. 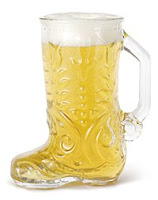 What still rankles me about this recent near-screw job, other than the obvious infraction, is that 5 shows in one year is a real accomplishment for me. As an independent playwright, I am marketing and soliciting my work all by my lonesome self, always on the look-out for anyone that will will want to put my babies on the boards. I am into this full time. It's like panning for gold and I have the nuggets to show for all my efforts. When I get the go ahead from a theater company, I have a tradition I perform every opening night. I have a glass boot, a gift from my step-daughter Tracey when she saw SONG OF THE CANYON KID at the Great American Melodrama and Vaudeville in in Oceano, CA. When a show opens, I fill the boot with a special craft beer and toast the theater as well as myself for the major personal victory it most certainly is. Unfortunately, I got robbed of that with this last show. I know, I know. Poor little me. But to have any score at all in the win column to is that spoonful of sugar helping the medicine go down. It's the balance that keeps me from falling over the edge, in the same manner my family and friends do as I mentioned above.

So much for all that spilt milk It's high time I put this behind  me and hoist one high in the air  to celebrate the five shows I have been fortunate to have produced in 2017 and to salute these fine theaters I have been honored to be associated with this year :

Cheers to you, one and all.

As for the rest of you, Happy Thanksgiving. As we usually say at Christmas, why can't we act this way all year long?
Posted by Scott Cherney at 10:08 PM