Call it a twist of fate, pure dumb luck or just the magic of Francois, but lightning has struck again in a
very significant fashion.  DEAD TUESDAY will have a one night only performance on June 1 in Delton, Michigan,  a benefit show for the Delton VFW produced by the Delton ACT (Amatuer Community Theatre). While that news is wonderful all by its lonesome self,this being the second of now 3 productions of DT this year, the story behind it makes it even more special for me.

I was contacted via e-mail by one of show's directors, Jordan Dimock  (Michael Moray being the other) a short time ago. He had read DEAD TUESDAY and asked if his theater could produce it. Even though it was a one and done performance, I don't take any offer lightly. I'm grateful that anyone would even consider doing my stuff. Sure, I'd like it if there were multiple shows because that means more royalties for moi. What can I say? I'm a stinkin' capitalist but also a starving artist. (By the way, I could use a snack.) 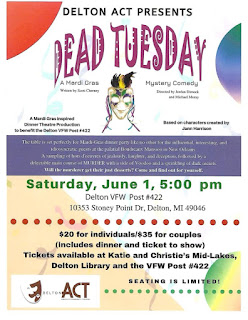 What makes this so swell for me is that Jordan found the script online, which exactly how I got started in this business to begin with. Back in the fall of 2013, the artistic director of the Great American Melodrama and Vaudeville Theater in Oceano, California found my melodrama    SONG OF THE CANYON KID online and wanted it for their summer attraction the following year. Encouraged by this sudden interest in something I had written, I began my long journey and contacting theaters myself and sending out scripts across the country. This resulted in a segue into uncharted waters, that being a distant cousin of melodrama theater, interactive murder mysteries, thanks to my pal Melanie Roady of Mel O'Drama Theater in Nashville. (see post: CROAK AND DAGGER: A FROG BLOG). As a result of my efforts since 2013, my shows, including the upcoming Delton performance, now total 19 productions in 12 different states. And there's more to come. Not too bad for a one man operation, if I do say so myself.  I gotta own this 'cuz it keeps me going in good times and bad. 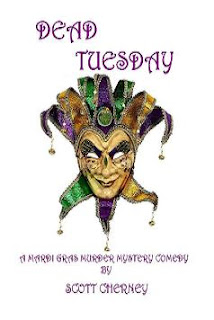 My scripts are on-line since I have yet to interest any publisher to take me on as a client, despite my minor success on the boards. Therefore, I went the self-publish route and with that great power comes great responsibility...and more time away from the actual task of WRITING. (Sorry. Didn't mean to yell.) But the main thing is, as Thomas Haden Chruch says to Paul Giamatti in the great film SIDEWAYS, "Just get your work out there, man." So, out of necessity, I took my unpublished (but not unproduced) work out of the dark and put it out in the world. While this has yielded only a few hits as opposed to my own solicitations, it was not only a starting point, but a means to an end. Stepping out of the shadows has done me a world of good.

My thanks to Delton ACT for choosing my show and everyone else who has done so in the past and plans to do so in the future.

And, of course, Francois sends his regards.

For more information about DEAD TUESDAY or any other piece o' writin' I done did, please visit my website: WRITTEN BY SCOTT CHERNEY
or if'n y'all wanna buy sumpin' go to: SCOTT CHERNEY'S STORE
or drop me a line at: writtenbysc@gmail.com (Ethiopian princes need not apply)