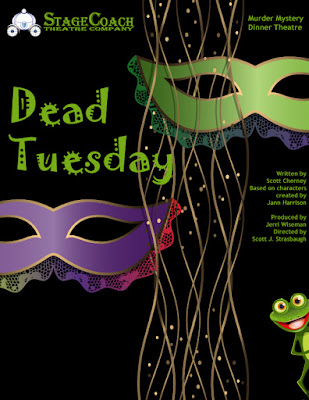 The StageCoach Theatre Company's next production is an interactive murder mystery written by yours truly entitled DEAD TUESDAY. The show will be performed over the next month in venues around Virginia and the Washington, DC metro area, previously uncharted territory for one of my shows.

DEAD TUESDAY is not a new script of mine. It has been re-titled from its original, THE PERILS OF FRANCOIS, which debuted in 2014 (see previous post: CROAK AND DAGGER)  If this is the first you've heard of it, the show tells the tale of an international philanthropist playboy who is the one who can solve the mystery of a prominent New Orlenas socialite during Mardi Gras, even though he's hampered by his own problems. A voodoo curse is turning him into a frog. Yep, it's a strange story to say the least. Most of the characters are based on the paintings of artist Jann Harrison. I was commissioned by Melanie Roady of Mel O'Drama Theater in Nashville to create a script using her creations and voila, here it is. It is such an odd duck of a show, I had my doubts whether or not it would see the light of a stage again. But thanks to Jerri Wiseman of StageCoach Theatre Company, Francois hops again.

Jerri asked if I would consider a name change since the original isn't very marketable. This is something I've toyed with myself, using the rather awful but comprised alternative MARDI GRAS MAYHEM in my own solicitations.This being a purely commercial venture, I'm totally flexible with this change and have no problem with her suggestion of DEAD TUESDAY (a riff on Mardi Gars' Fat Tuesday). Back in 2013, the Great American Melodrama asked to change the title of my melo from SONG OF THE LONE PRAIRIE to TALES OF THE CANYON KID. I opted for SONG OF THE CANYON KID to coincide with the novel version I had just published. (That play will now be known by that title alone) Theaters wishing to make changes to a work should be flown by the author and I appreciate the integrity of an organization having the respect to do so, especially for an independent like myself. 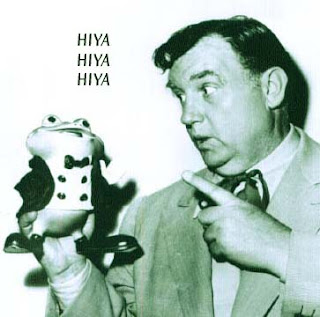 So welcome back, Francois. Let the good times croak.

For more information of the StageCoach Theatre Company production of DEAD TUESDAY, visit their website at stagecoachtc.com and their Facebook page

To read an excerpt or find more information about  DEAD TUESDAY aka THE PERILS OF FRANCOIS, go to my website. SCOTT CHERNEY'S ETC.

Performance rights are available. For more info, e-mail at wriitenbysc@gmail.com