The Year of the Frog 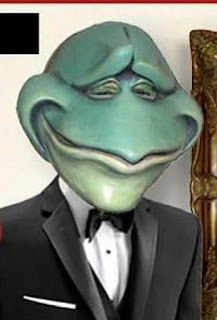 A few years back, a project fell into my lap, the strangest theatrical venture with which I've been involved, and one that I believed to be a one-shot wonder. Hence, the tale of Francois Fibian, a bon vivant from New Orleans that solves a murder mystery as he's turning into a frog (?!) Yup, that's the premise DEAD TUESDAY, formerly known as THE PERILS OF FRANCOIS began back in 2014.
(see previous post: CROAK AND DAGGER: A FROG BLOG) Thanks to an angel named mel Roady in Nashville, I got my first script commission for an interactive murder mystery, a genre I never attempted before.
While I am proud of the end result, I never expected FRANCOIS to see the light of day again. That
didn't stop me from submitting it to theaters here, there and everywhere, especially after Mel produced yet another original script STAR TRUCK: THE WRATH OF COMIC-CON (now re-named MURDER: THE FINAL FRONTIER) the following year. That show I felt had the most potential for future productions and I was (initially) proven right. LO and behold, the StageCoach Theatre Company agreed to stage FRANCOIS a second time. (WHUT?) Producer Jerri Wiseman asked my permission to change the name of the show to the more marketable title DEAD TUESDAY. I liked it enough to keep it. (see previous post: DEAD TUESDAY) A year later, a third production was mounted in Illinois which made me believe that this show is indeed legit. One production is a fluke, two, a blessing, three,no longer a bastard.

After a several dozen inquiries (and a few publication rejections which is why I done did myself), I heard from TWO separate companies on both sides of the country that wanted to mount productions in 2019.

First up, the Rogue Theater in Sturgeon Bay, Wisconsin has seven performances scheduled at various venues in their area beginning April 3.

This fall, Francois will hop across the country, SanZman Productions will stage the West Coast premiere of DEAD TUESDAY in the Los Angeles area beginning in October. 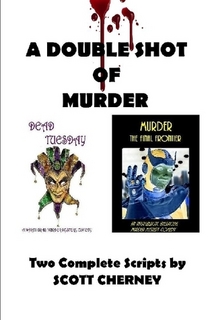 So to the Rogue Theater and SanZman Productions, I thank you, Francois thanks you and most of all...Break a flipper.

As you can plainly see, croak happens.

DEAD TUESDAY is available at SCOTT CHERNEY'S STORE, separately or combined with MURDER: THE FINAL FRONTIER in a volume called A DOUBLE SHOT OF MURDER

To read an excerpt of DEAD TUESDAY, go to my website WRITTEN BY SCOTT CHERNEY

Posted by Scott Cherney at 6:39 PM