This year, DEAD TUESDAY, the interactive murder mystery formerly known as THE PERILS OF 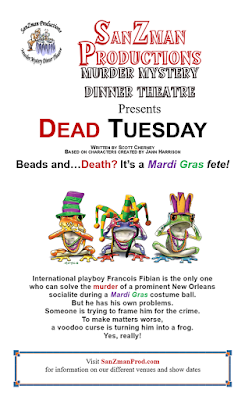 FRANCOIS, celebrates its 5th anniversary. And what a year it has been, having its fullest production slate since its inception back 2014. Three different theater companies across the country staged this opus o' mine, not bad for a show I didn't think would get past its first production. Apparently, Jann Harrison's creation, Francois Fibian, the man who would be frog as interpreted by yours truly, has caught on beyond my expectations. It's not that I thought it was an inferior product. Not at all. I'm proud of this script, but it was just that it's so...odd, a little quirky for the general public. Blissfully wrong again.

Ending the year with a bang, not a croak, DEAD TUESDAY's third and final production of the year will also be its West Coast premiere courtesy of SanZman Productions down in La La Land. Technically, it's not Hollywood, but that's moot as far as I'm concerned. SanZman will stage DT in several locations in the L.A. area. 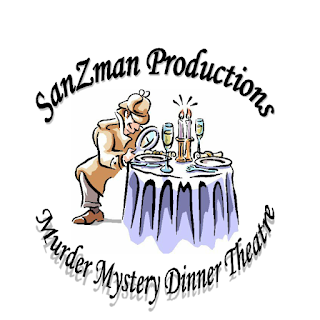 To make matters even sweeter, my friend Melanie Roady, the producer who commissioned me to write this show in the first place, gave me yet another wonderful and generous gift. Previously, she sent me the the latex mask from that first show in Nashville, a full head that sits inside the front door of my apartment. Now she mailed me a framed authentic Jann Harrison original of Monsieur Fibian. Her reasoning was that he belongs with his "daddy creator". Aw, shucks. That woman is the best.
As I stated in the past, I have blessed to have an angel like Mel in my corner. She put me on this path that I've been on for half a decade now, helping me achieve a third act in life and making me find my way once again. I am eternally humbled and grateful. Love you, Mel.

So this month wraps up the Year of the Frog and it's been all Francois all the time. In 2020, I have three bookings at this writing including my first here in Oregon. Huzzah! More to come (fingers crossed) including an interesting side hustle and some honest-to-goodness new material (fingers uncrossed so I can write).

As a former boss of mine used to say-

Performance rights for DEAD TUESDAY are available. Contact me at writtenbysc@gmail.com

Posted by Scott Cherney at 2:36 PM

I sincerely would love to see this production. One that I could sit back and enjoy with no worries. One day, some where, I will be in the audience! Sincerely, Mel

Save a seat for me and I'd be glad to join you.